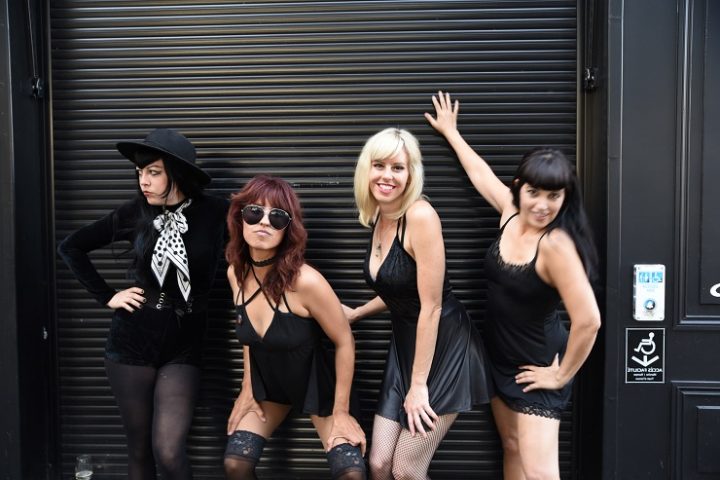 They previously released two ten-inch EPs (in october 2016 and then in january 2017) and those two EPs were issued as an album (The Darts, 2017). Me.Ow., released in November 2017 on the London-based record label Dirty Water Records, is their first full length album (12 titles) that they recorded as an album.

THE DARTS (US) started their 2018 european tour (12 gigs in total) last 26th june in London, and then performed in Germany (Celle, Helling), The Netherlands (Utrecht), Belgium (Saint-Léger, Hainaut) and France (Bourges, Périgueux, Bordeaux, Clermont-Ferrand). They will play in Paris this evening at L’Alimentation Générale.

We had the opportunity to meet with them last 2nd july, just before the gig at Bar Le Château d’Eau venue in Bourges. An interview punctuated with gales of laughter, joking, fun and good humor. Nicole, Rikki, Christina and Michelle were invited to choose the questions, an extract of famous Proust’s questionnaire, written on small sheets of paper…

What is your present state of mind ?

Christina : I love being back in France. I’ve only been here once (last year in may’17) so I’m very happy to be here, with these girls. Crazy happy!

Rikky : I’m feeling so grateful like I… every moment of the Tour so far, it’s been the best promotors, the best food… We played in amazing venues, we have some amazing things coming up and I just… I couldn’t be more grateful !

Nicole : Everything they said… and good wine! (laughs). Especially, Sauvignon from the local, fantastic!

Your idea of happiness ?

Nicole : Happiness to me is a great meal, some great music, some great conversation and then a great sleep for twelve hours.

Michelle : Happiness is living your dreams.

Christina : Happiness is travelling the world with good people that I love and getting to play rock’n’roll every night.

What I hate the most ?

Rikki : You know… I’d want to live in London at some point. Just because I’d love to live there.

Nicole : French countryside. In the country. In the middle/south of France, with a peaceful area, where I can have a studio.

Michelle : I can’t like the small city scene, been around the big cities… I would choose my top five, so far they know would be Seattle, Dijon, Germany (!), Silly (in Belgium) and then Sint-Pieters (also in Belgium).

If not yourself, who would you be ?

Michelle : I never thought of that… I need to think about this a little bit… I would like to be a man (laughs). I love men !

Rikki : I don’t know if one of we five would have been anybody else… I think I just… I don’t know… I’m pretty happy to be myself I think.

Christina : Ok, let’s see… I like my life a lot (laughs)… but I think one of my main influence starting playing music was Poison Ivy from The Cramps. If I could be anybody else, I would probably be her. I would want to play that guitar and be that badass bitch. I would have loved to play with Lux, that’s all…

Rikki : She’s amazing ! She’s the most organized person I have ever met in my life. She can do thirty things at once and control everything about this band. She is a really good leader. And she’s an amazing musician.

Nicole : Rikki gets along with everybody. She’s very empathic… She’s the perfect girl-friend for anybody ! That’s true ! (laughs)

Christina (daydreaming, she answers on herself) : I play music. I love music and travelling. Oh ! I’ve to describe Rikki? (bursts of laugh). I love her so much ! She’s amazing, she’s happy all the time, she can travel anywhere and she’s easy-going.

Nicole : She loves rock’n’roll more than anybody else I know and she is so passionate about music.

Rikki : Yes, I got the same thing : she loves rock’n’roll, that’s the first thing and the only thing !

Nicole : Christina is surprisingly emotional and sweet even though she tries to be a badass on the front. But deep down inside, it’s all sappy, gooey, it’s so wonderful. I love her !

Michelle : Christina is the best bass player I have ever played with !

Rikki : I know Christina behing her scenes, behind the ‘’roarrr’’ character and she’s probably one of the most nicest person.

Michelle : This is easy : your favourite occupation? Rock’n’roll mother fucker !!! (bursts of laughs) That’s it ! That’s all ! Touring the world and play rock’n’roll.

Nicole : Being a musician is a lot of freedom involved. If you could do it for a living, it would be awesome !

Nicole : Play music, performing music, music business, it’s really hard work but there’s no other business I’ve ever been involved in and paid off !

Your favourite heroes in fiction ? and in real life ?

Rikki : Okay… My mum is like my hero. She’s got more patience than anyone else I know in my life.

Christina : Rikki stoled my mind. It was my mum too. She told me to do everything whenever I wanted to. She was very supportive. She’s not around anymore. So that’s the only thing I can say is my biggest frustration…

Nicole : Fiction? You got fiction?

Nicole : I would say for hero of real life, a couple of years, when I saw the drummer from The Sonics, Dusty Watson, one of the greatest people I have encountered in my life and then my father ‘cause he inspired me to play rock’n’roll. And heroes in fiction? Batman !

The natural talent I’d like to be gifted with ?

Michelle : Uh…. (after a few seconds of reflection)… To inspire people in a positive way.

Rikki : A talent or just anything ? I think I’d need more patience probably.

Nicole : I would like to cook. I’m the worst cook ever. If I could cook, I’d be so happy!

Your favourite colour and flower ?

Christina : Well, my favourite colour is obviously black. It’s suitable to me. My favourite flower would be… I don’t know… I like when artichokes bloom, when it turns into a flower, it’s really pretty, it’s so beautiful !

Michelle : My favourite colour is purple. And my favourite flower would be… You know I really like some flowers from a backyard.

Rikki : My favourite colour is red and my favourite would be… Tiger lilies probably.

Nicole : My favourite colour is kelly green and my favourite flower is the iris.

Nicole : That’s may be my favourite interview ! I like how we got to choose these questions.